Have you guys taken that Prophecy Sciences test yet?  Look at my results:  I “play like an entrepreneur”.  Whew 🙂 I was beginning to think I was an attorney…send me yours so we can debate our accuracy. 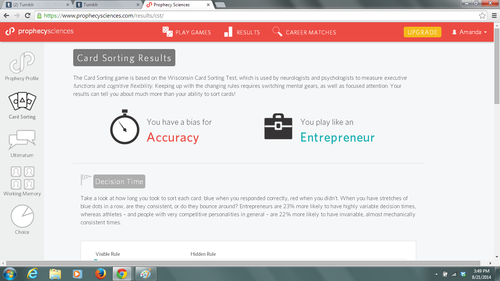 Has anyone gotten a VC or scientist result?  I’ll finish taking the tests.

On Choice, I got Venture Capitalist with 760 points.  71% Risk Appetite and 76% Value Maximization.  After a win, I have 2.9 seconds till recovery.  After a loss, I have 3.4 seconds to recover.  So according to this, the variable is caused by the gut trying to reevaluate the game.

“The time you spend making your decision depends on lots of things: how similar or different the options are, whether you’re trying to do math in your head, or maybe what your gut is telling you. They might even change following wins (when you scored the higher number in the spinner) and losses (when you scored the lower number). Mathematicians and lawyers have the least variability in their decision times, while entrepreneurs and venture capitalists have more variability.”

This may be a good place to introduce yourself and your site or include some credits.